I just came back from being a judge in the Penn Wharton Startup Challenge on campus in Philadelphia.

This was without question the highest level startup contest I’ve been a part of. There were over 200 judges.

The contest had the startups submit decks, with or without financials, an application, and videos of personal statements and literal elevator pitches that were recorded in an elevator.

The eight finalists, repeated their five minute pitches from the semifinals in the morning, then gave another two minute pitch on the staircase in Huntsman Hall.

After having seen thousands of pitches and having read more business plans, decks, and financial models than I care to admit, it’s not hard to quickly identify startups that will do will in such contests. As I’ve written about in another post, if you have these four elements, you’ll do well:

I got to know two teams quite well – Dexio: Blockchain for diamonds, and InstaHub: Snap-on occupancy sensors for light switches. I predict bright futures for both of them. Here’s a photo I took of Michal Benedykcinski, Timothy Clancy, and HQ Han from Dexio doing their final staircase pitch. 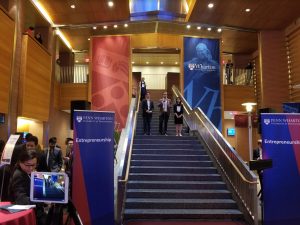