Startup valuations are hard enough without some jargon to muck up the waters even more.

Fortunately, these terms are about as simple as it gets, once you learn the math.

Let’s put this in the context of a startupper named Casimir. Casimir has come up with a new Internet router technology that he’s sure will either be bought by Cisco within 2-3 years, or bankrupt them within ten. Hey, we entrepreneurs are nothing if not brobdingnagingly optimistic.

Casimir kills it at the Tri State Angel Investor Dinner PitchPalooza. Calls flood in the next day over the VOIP network powered by, what else, his new router. One Angel in particular seems like a great fit, and after a couple discussions, they’re ready to talk turkey. The investor says he’s willing to invest $1 million at a $5 million valuation. Casimir quickly crunches the numbers, and realizes that the investor would get 20%. So far, so good.

But then the investor says “And to confirm, this is pre-money.” No entrepreneur wants to reveal that he doesn’t know a basic investing term, so Casimir responds “Of course!”

Was he right to do so? Or was there some pooch screwing here?

That’s it. Valuations are often the most difficult part of negotiations with a potential investor, but this terminology doesn’t have to be.

There are a lot of things that you don’t think of when you finally take the plunge and start your new company.

One thing that often sneaks up on entrepreneurs is intellectual property. Are you comfortable with how much you know about patents, trademarks, and copyrights?

One of the free bonuses that comes with EZ Numbers is our Guide to Intellectual Property. It walks you through the basics, and gives you some horror stories to help you avoid some really difficult situations. If you’d like a copy of the guide, e-mail us at info@eznumbers.com, and we’ll send it to you.

You need the paid versions to really understand your business in depth, get a loan, or get an investment. We’ve had a lot of users tell us that until they used EZ, they hadn’t really understood their business.

But if you just want to test out a rough business idea, the Free Version might be all you need. It is a fully functional pro forma template for your startup projections. Enter your Capital Expenditures, Sales & Marketing and Operating Expenses, Personnel, Sales, Loans, and Investment, and you’ll instantly get your P&L, Cash Flow, and Balance Sheet.

Note: The Free Version is not the same as the paid versions. It’s completely different code. So it’s not designed to be an evaluation for the paid versions, which have far more functionality.

It will only take you a few minutes to see how your business idea pans out – and then make as many changes as you like and see how they affect your bottom line profit and cash flow.

To get your copy, just e-mail us at info@eznumbers.com. 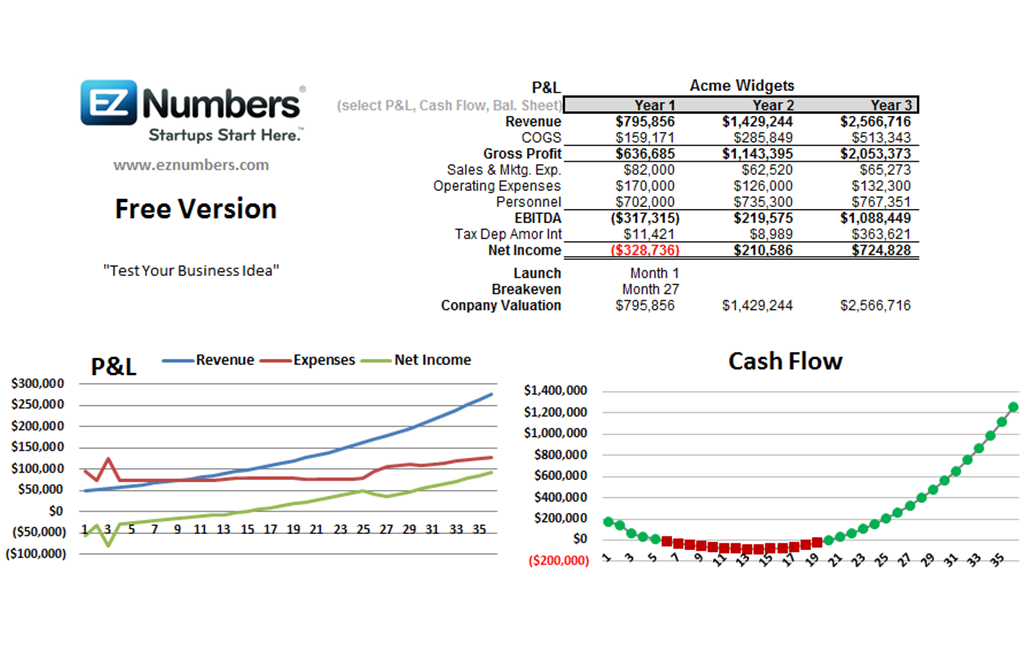 You may be aware of the Leahy-Smith America Invents Act.

Passed in 2011, and just going into effect last month on March 16, this law represents a sweeping change in American patent law.

From the beginning of patent law in the United States, we have operated under a “first to invent” system. Therefore even if someone else filed a patent before you, if you could somehow prove that you had not only come up with the idea (remember, no law anywhere on earth protects ideas alone) but a “reduction to practice,” then you would have grounds to invalidate the subsequent filing by the other party. Whether or not you would be able to afford the often drawn-out legal proceedings is another matter.

But now we are on a “first to file” basis, like much the rest of the world. This means that even if you invent something first, have meticulous inventor logs and other forms of proof of your primacy, if you do not file first, you will not get a patent.

This is widely seen as an advantage for large companies and patent trolls who can rifle off application after application. For many inventors and small business people, filing a patent is an expensive and drawn out proposition.

There are some interesting aspects to the law, including:

-If you have been using substantially the same invention for more than a year before the date of another party’s filing, you will still have the ability to continue exploiting the invention in the same way, with some limitations.
-The definition of prior art – previous disclosures which can prevent a patent from being granted or invalidate an existing patent, has been widened to include more international information.

This law is an important change to patent law, and it’s important that you be aware of it if you have any plans to file a patent now or in the future.

I’ve had people ask me when is the best time to start a new company.

-“I better wait until after the election.”

-“This sequestrations business – better to see how this all pans out.”

-“I heard that crowd funding for startups will be legal soon. That’s the perfect time.”

There’s always that “perfect time” around the corner. Past that big uncertain event, or after something that will make things more advantageous for you.

Don’t buy into that.

The right time is now.

The first is that you starting a new business can be exciting and terrifying all at the same time. You want to wait either because of some important external event like ones listed above. Or it could be something internal – the product’s not perfect yet, you need to get the intellectual property nailed down, or that key partner/employee needs to be locked into place first. There’s a huge difference between doing the prep work for you new company. It’s all too easy to keep putting off actually starting your company, and to find a rationalization.

There’s never a perfect time. You’ll never find all of the internal and external stars all aligned perfectly. The universe just doesn’t work like that.

The second reason is that if you have a great idea for a new company, a truly great idea – it needs to be a novel solution for an existing market problem. If the market has a need for your idea, it needs it now. In these days of lean startups and fast and furious flowing information, you simply don’t have the luxury to wait – the market will promote other solutions. Your idea has a very short shelf life.

So don’t wait for that new tax law or until you get that first big contract. Start your company now. Today. That doesn’t mean you have to throw all caution to the wind – quit your job, and pour all of your savings into your company immediately, but you need to commit – because once you actually start it, you’ll think about it in whole new way. And with a little luck, it won’t be too late.