EZ Numbers has helped thousands of startups raise over $1 billion.

We can help you.

A lot of entrepreneurs get bogged down working on fancy 30 page business plans or snazzy ten slide decks.

Often they pay consultants thousands of dollars for something that looks nice but doesn’t really feel like a part of the company. And all the time spent on this is less time actually growing the business.

Once the plan or deck is done, many entrepreneurs are worn down and hastily put together some financial projections the night before an investor meeting. 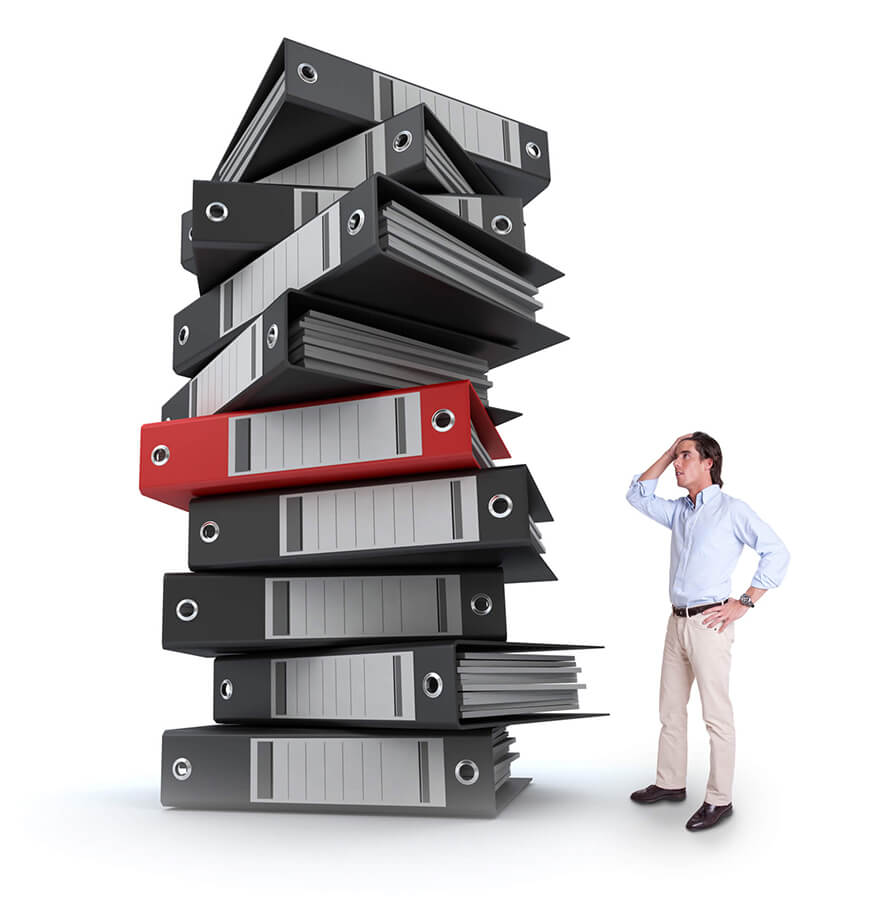 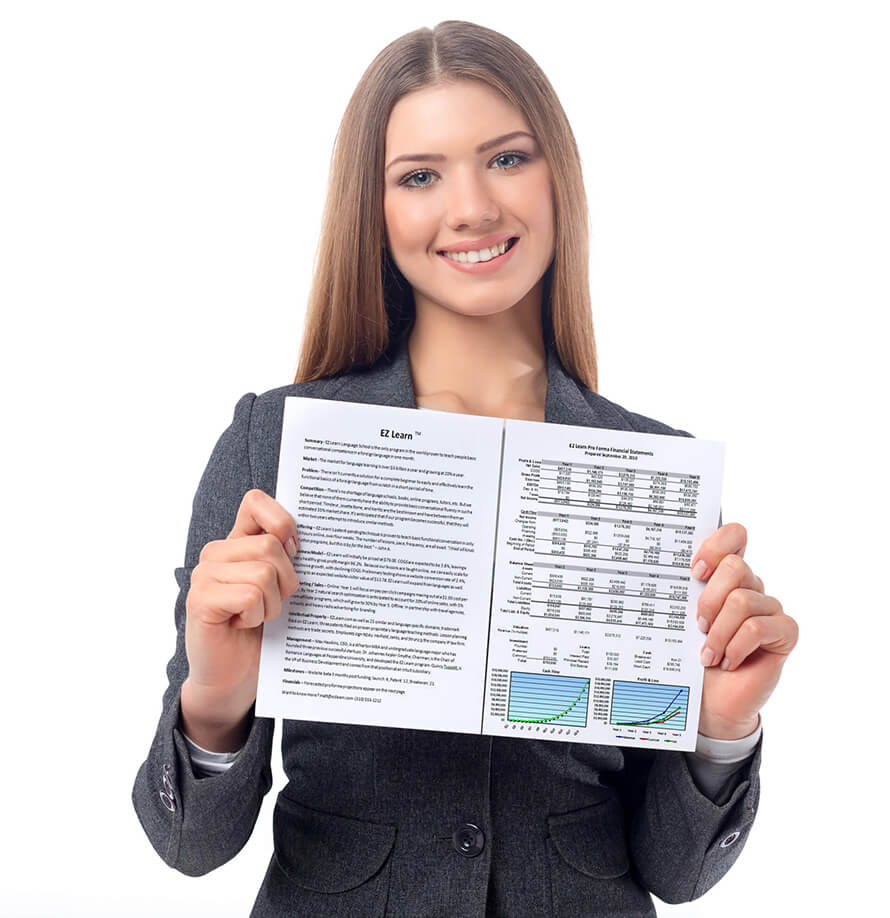 We believe in a different way.

Nobody cares if you have a fancy plan or deck. A business plan won’t get an investment, it will only get the next meeting.

We think you should spend less time on your plan, and more on your numbers. Nobody can predict the future, but when investors see that you’ve actually given some thought to your expenses and sales, they can evaluate if you’re reasonable.

And you’ll learn your business in a way that you’ve never seen it before.

Your numbers are more important than your words.

You don’t need to know any accounting, finance, or Excel.

We walk you through the whole process. Enter basic info about your expenses and sales, and EZ will instantly make your P&L, Cash Flow, Balance Sheet, Breakeven, and investor returns automatically.

Spend a little more time learning the numbers in your business, and then spend the time you save by making a simple, effective plan on actually talking to investors and, well, building your business. 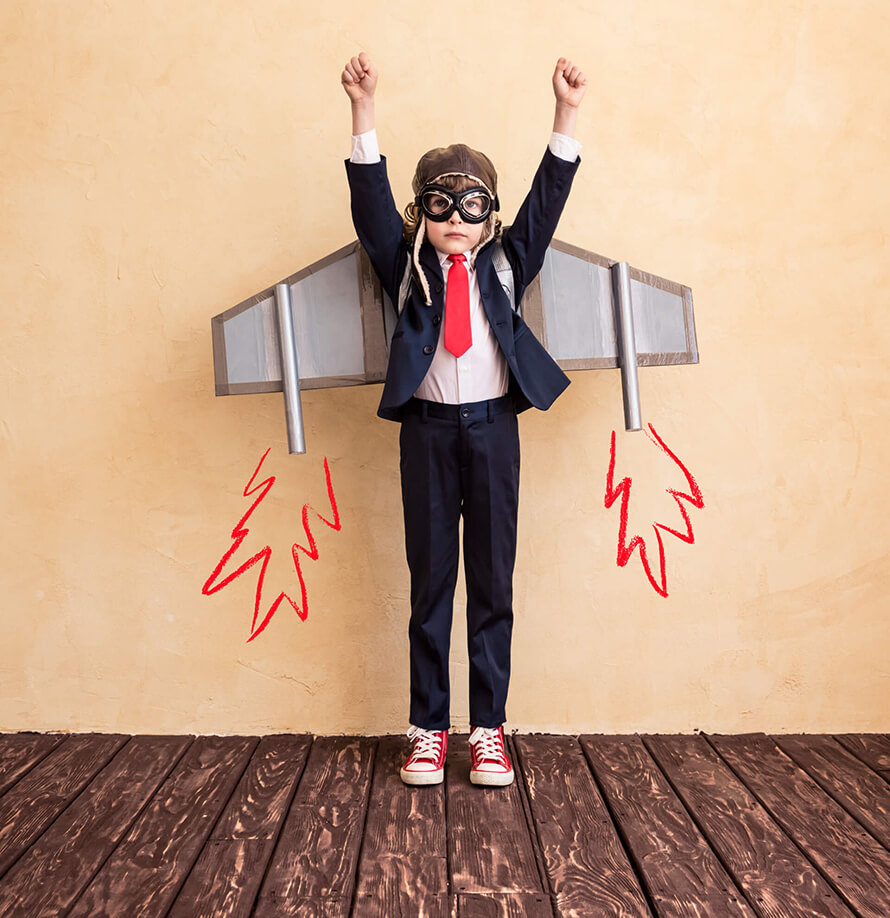 I'm ready to get started

All Kinds of Cool Features

With our video tutorials, instructions, help articles, FAQ, Glossary, and blog, we walk you through everything you need to do.

You’ll be whipping your projections into shape within minutes. This doesn’t have to be hard, we do the heavy lifting for you.

Works For Any Business

From shipyards to nanotechnology, we can handle it. Combine our powerful formulas with your ability to enter custom info.

We’ll create the reports you need for to get the money you want. Applying for an SBA loan? Your 12 month P&L is waiting for you.

No deer in the headlights for you. You’ll be confident meeting investors, because you made, and understand your numbers.

The Only Business Plan Template You’ll Ever Need, the EZ Guide to Intellectual Property, and Inventor Factory.  (Check them out)

Used by the Wharton Entrepreneurship Program

"Since using EZ Numbers I've created pro formas resulting in the funding of over $30 milllion."

Blake Byerley
“Thanks for your great customer service – you obviously care about your customers.”

Leslie Dupol
“I am a Harvard MBA. I've done tons of models, but I don't have time. I LOVE this program.”

Tim Kaplan
“To use a Ken Blanchard term, I am a Raving Fan of EZ Numbers. You guys just rock.”

John Boeheim
"Within two hours of downloading EZ Numbers, I had all the facts for my business."

Dave Saunders
Plenty more where these came from

On your marks. Get set. Go!

30 day 100% money back guarantee. No questions, no limitations, no nothing.

We will never give your info to anyone ever. We don't have access to your credit card info. We won't e-mail you if you ask us to stop. 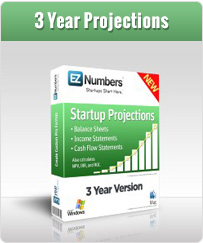 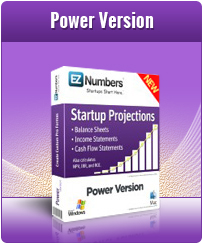 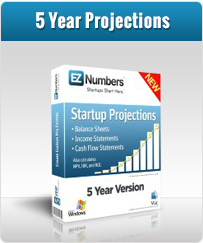 Ya Gotta Watch This

Customization:
Do you need help with creating your own custom revenue model? Do you want to make sure that your numbers are both realistic and impressive to investors? Combine our expertise with EZ Numbers to get the highest level, most cost effective solution you can for your projections.

Part-Time CFO:
Do you need a top level CFO to help you with your company valuation, set up your company, raise money, and help manage your company? The EZ Numbers Part-Time CFOs are MBAs from Wharton, Harvard, or Stanford with over 15 years of startup experience. We can help short-term or ongoing.

Board:
Our team has significant startup experience. We can help advise you on setting up, recruiting, empaneling, and running Board meetings of world-class Directors who will provide the high level governance that can make the difference between an exciting startup and a successful one.

We believe that when you make your projections, your idea turns into a startup.

When you raise the money you need, or start selling enough to pay your expenses and grow, your startup gets serious.

And when you reach product / market fit, your startup becomes a business.

We’ve been helping thousands of ideas become startups and then businesses for over ten years.

Paul Hynek got tired of making projections from scratch for his startups and for friends. He tried to find a template that he thought would work for all kinds of companies, and that anyone could use, but they were either way too complicated or just couldn’t handle anything beyond a lemonade stand. So he finally gave in and decided to make his own program. So you can either thank or curse him.

Paul is a Wharton MBA and an Adjunct Professor of Finance and Accounting at Pepperdine University and has extensive experience in tech, finance, and entertainment in the US, Europe, and Asia.

He has served as CEO, CFO, and VP of Business Development for high tech, financial, entertainment, and product development companies in the U.S., Europe, and Asia, and is known as the ”Startup CFO” for his work with dozens of startups.

He produced the first set top box online experience, and conceived and created the world’s first online service for kids, which raised $50 million, and which he introduced with Bill Gates at the launch of Internet Explorer 4.0.

He played a key role at Giant Studios in Hollywood, working on Avatar, Planet of the Apes, Tintin, Real Steel, Lord of the Rings, Halo, Call of Duty, etc. Paul was instrumental in securing the rights to the source code, working with Microsoft on the development of Kinect, and enabling the sale of the company to James Cameron after Avatar.

Paul has extensive Board and Board Chair experience for both for profits and non-profits.

He is currently active in virtual and augmented reality, and blockchain.

Paul also has an MA from the School of Arts & Sciences of the University of Pennsylvania, is a Fellow of the Joseph H. Lauder Institute Global MBA program where he is an alumnus of the French international program, and has a BA from the University of Illinois.

Paul’s interests include the Singularity, virtual reality, life extension, travel, and foreign languages. He learned to read and write Thai so he could order mango and sticky rick off the menu. Paul lives in Calabasas, outside of Los Angeles, where he cavorts with coyotes on early morning mountain hikes.

That did it - Get me started!

I spent last week in Austin at the behest of the National Security Technology Accelerator and TheIncLab. NSTXL is a non-profit that works across the Department of Defense helping to manage contracts and vendors. Last week they organized a pioneering multi-day event to bring leaders from virtual and augmented reality companies as well as government

I just came back from being a judge in the Penn Wharton Startup Challenge on campus in Philadelphia. This was without question the highest level startup contest I’ve been a part of. There were over 200 judges. The contest had the startups submit decks, with or without financials, an application, and videos of personal statements